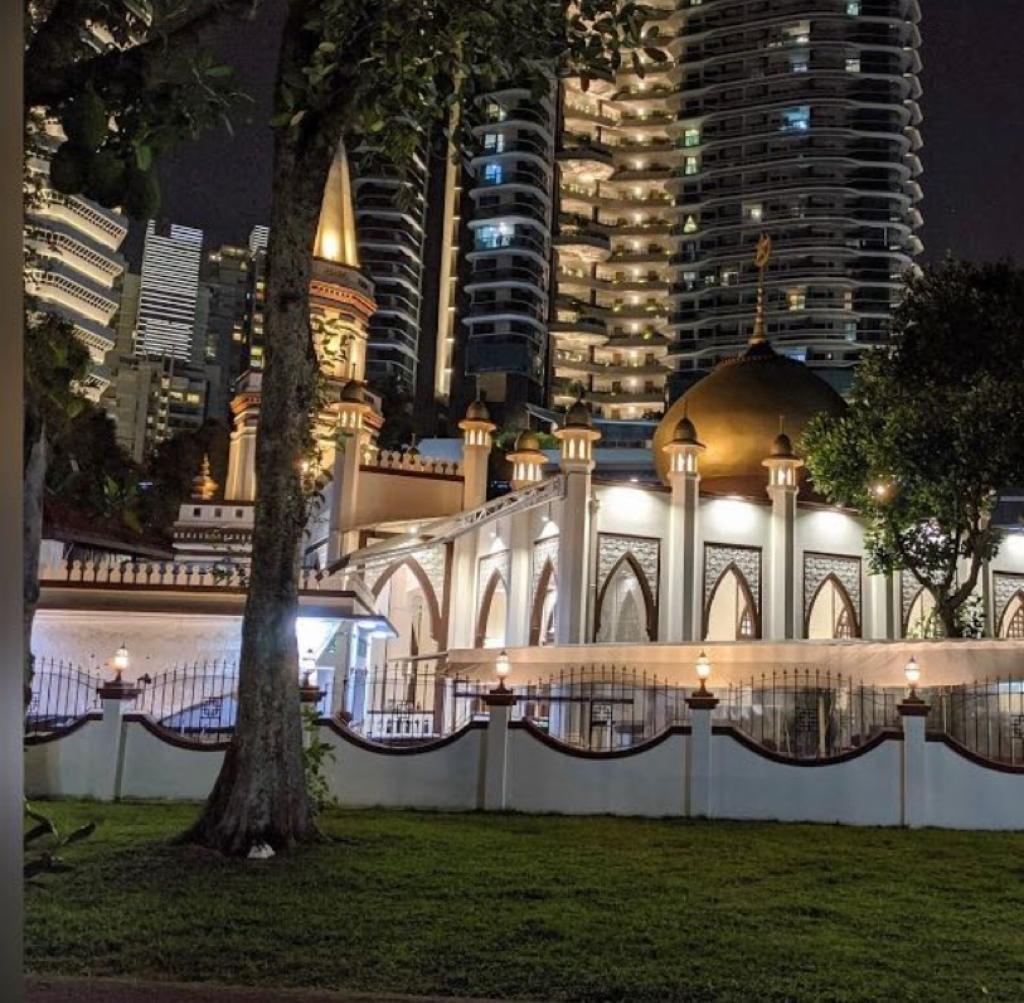 Hajjah Fatimah Mosque is located along Beach Road in the historic Kampong Glam area. The mosque was designed in a mix of Islamic and European architectural styles, and completed in 1846.

The mosque was named after Hajjah Fatimah, a wealthy businesswoman. It is the first local mosque to be named after a woman. The mosque used to be known as Java Road Mosque, after an adjoining road that has since been expunged. Hajjah Fatimah Mosque is the only structure left of the former settlement of Java Road. The mosque was built at this site which used to be the residence of its founder, after whom it is named.

Combining eastern and western design elements, the mosque is known for its unique minaret, and its noticeable tilt, leading it to be nicknamed the “leaning tower of Singapore”. The mosque was gazetted as a national monument on 28 June 1973.

Hajjah Fatimah Binte Sulaiman was born in Malacca, Malaysia, to a family of successful traders. Her year of birth is believed to be 1754. She married Daing Chanda Pulih, a Bugis prince and merchant from South Sulawesi (then known as Celebes). Pulih had a trading post in Singapore, and brought Fatimah with him to the island. Pulih died while Fatimah was still young, and she combined his business with her own boats and built a successful steamship and sailboat-based trading operation.

Before her husband died, Fatimah had a daughter with him, Raja Siti Karaeng Chanda Pulih. The title “Raja” in her daughter’s name is an honorific title for Bugis royalty. Raja Siti would go on to marry Sayyid Ahmad ibn ‘Abdur-Rahman As-Saqqaf, whose family would become known for their philanthropy, like Fatimah herself.

Fatimah's wealth led to her becoming known as the "Sultana of Gowa". It also made her residence in Kampong Glam the target of thieves, who burgled it twice and set it on fire during the second burglary. Fatimah was not present for the burglaries and thus was not harmed. To demonstrate her gratitude to divine providence for having spared her life, Hajjah Fatimah built a mosque on the land where her residence once stood. The mosque was eventually named after her. Fatimah rebuilt her own house, and also funded the construction of houses for the poor, in the land adjacent to the new.

Fatimah is commonly referred to as "Hajjah Fatimah", “Hajjah” being an honorific title given to women who have completed their pilgrimage to Mecca - thus indicating that she made the pilgrimage to Mecca, or Hajj. The exact date of her death is unknown, but it is believed Fatimah lived to the age of 98. She is buried on the grounds of the Masjid Hajjah Fatimah, along with her husband and son-in-law, and several of their descendants.

After her death, her son-in-law took over her business, which eventually passed on to the Alsagoff family. The Alsagoffs were also keepers of the Hajjah Fatimah Mosque. Hajjah Fatimah was associated with the Alsagoff family through her daughter’s marriage, and several of her descendants established themselves as pioneers in the local community. Her grandson, Syed Mohamed Ahmad Alsagoff, (well known as “Nong Chik”) also was the founder of the Muslimin Trust Fund Association, which runs the mosque together with the Majlis Ugama Islam Singapura (Singapore Islamic Religious Council).

For her philanthropy and role in establishing the mosque that bears her name, Hajjah Fatimah Binte Sulaiman was inducted into the Singapore Women's Hall of Fame in 2014, the Hall of Fame's inaugural year. She had previously been honored in a nine-member Wall of Fame that evolved into the larger Hall of Fame.